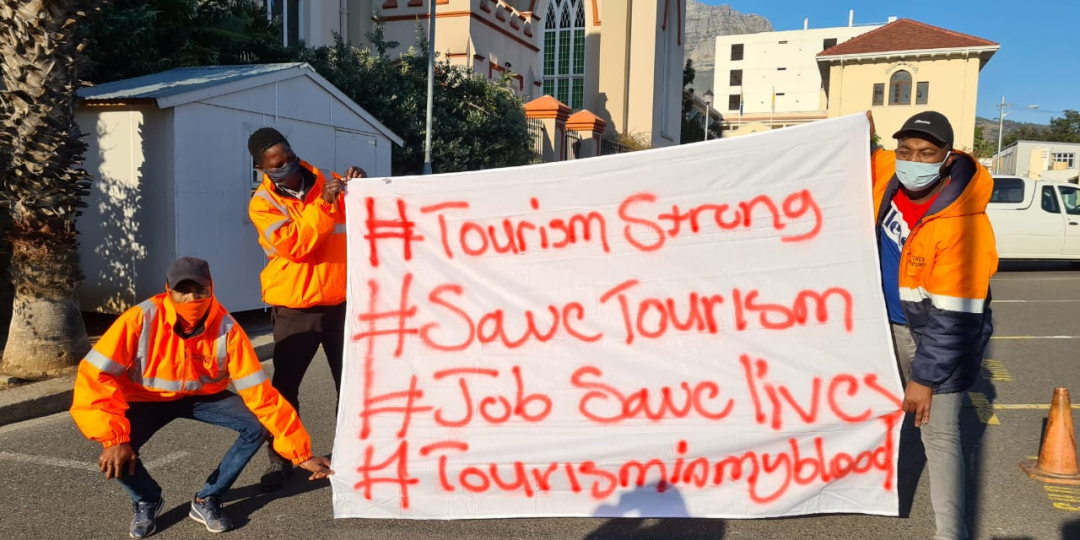 The tourism and hospitality sectors in South Africa continue to lobby against lockdown restrictions, which are limiting their earning potential.

Peaceful protests in Cape Town received attention last week when police dispersed the crowds. This week protestors have chosen to stay safely inside vehicles with slow-drives in Nelspruit on July 30, and in Johannesburg and Cape Town today (July 31).

Tourism vehicles have been encouraged to join the drives by the Private Charter Passenger Association. “The beverage and guiding industries are behind us, but we want the rest of the operators, hotels, restaurants and lodges to join the drive,” said the association’s Chairperson, Fiona Brooke-Leggatt.

In Nelspruit about 25 vehicles drove past government buildings. “We don’t like to call it a protest, we prefer to call it a slow-awareness-drive,” said Owner of Hylton Langley Safaris & Adventures, Hylton Langley. He said during the drive nobody exited their vehicle and the demonstrations were entirely peaceful. Nonetheless, the convoy was stopped by police who had received a noise complaint about the vehicles. “That’s what we want. We want to be an annoying mosquito that they have to listen to,” said Langley.

A slow-drive scheduled to take place in the Eastern Cape on Saturday (August 1) has been postponed in light of the Minister of Tourism, Mmamoloko Kubayi-Ngubane’s announcement on July 30 that intra-provincial travel restrictions would be lifted.

Owner of Beckmann’s Tours & Safaris, Luke Ashwell Beckmann, said while he believed the changes announced by the Minister were a step in the right direction, the event organisers had decided to wait for the Government Gazette to finalise exactly what was and was not allowed before pushing forward with the awareness drive.

A Franschhoek guesthouse owner, Tim Roggenbach, has launched the ‘Open Tourism in South Africa Now’ petition that has already gained over 28 000 signatures. The winelands town of Franschhoek has been badly affected by COVID restrictions, with the destination being home to more than 66 restaurants, 80 wine estates as well as 120 accommodation establishments and 250 holiday rentals.

According to Langley, the opening of intra-provincial travel and open-air safari vehicles will not make a huge difference for the industry. He said the amount of registered safari vehicles in the Kruger Park area compared with the number of Mpumalanga residents who could even afford leisure safaris at the moment was just not significant enough.